The Unicycle Diaries is my first book for young adults. Scroll down to read the first chapter, or click here to read the Welsh translation. 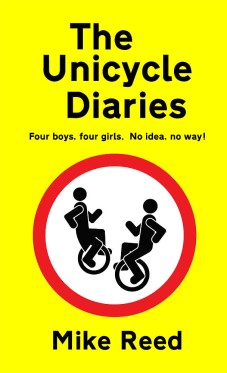 Gita doesn’t always understand it, Holly won’t talk about it, but Fiona doesn’t appear to have a problem and Becca says she can’t get enough.

Dave thinks he knows what girls like, but to Ollie it’s like they don’t even exist. Barry’s non-stop-eye-pop keeps getting him into trouble,while the ladies just ignore Ed altogether.

Follow eight friends through dates, parties, cinemas and sushi bars, break up’s and make up’s, bedrooms, bathrooms, classrooms and an airing cupboard as they to try work out how to get beyond ‘riding the unicycle’.

“Condoms,” said the teacher, “are the best way to protect against sexually transmitted infections AND unplanned pregnancy.”
Ollie looked up in surprise at the teacher’s loud word, but realized he wasn’t in any trouble and went back to drawing a face on the banana. Ed would have usually stopped him from doing this, but he was concentrating on the worksheet in front of him.
‘Sex!’ thought Ed. There wasn’t any maths in sex and they had already covered the biology part in science. There wasn’t even a test, so you couldn’t revise anything. Ed dealt with the problem by adding notes to the worksheet in his best handwriting.
‘I might need this,’ he thought, ‘there could still be a test.’
The teacher started to give out the condoms and there was lots of talking and noise as each pair snapped up their packet.
“Don’t open them yet!” said the teacher. “We’ll do it together.”
Across the room from the boys, Becca screwed her face up and pointed her banana at Gita like a weapon.
“Shtick ’em up, punk!”
“I’ll do whatever you say!” said Gita, putting her hands up in fake panic. “Just please don’t…peel me?”
The teacher put a condom down in front of them and the girls looked at it.
“Have you ever opened one of these?” asked Gita.
“What, condoms?…Er, yeah!” lied Becca. “It’s easy, unless you’re in a hot tub and your fingers have gone all pruney from the sexy hot water.”
“Oh, right,” said Gita.
She knew that the closest Becca had come to being in a hot tub with someone was sharing a paddling pool with her when they had been five years old.
‘Oh crap!’ thought Becca, ‘I hope I don’t mess this up.’
She looked over to where the boys were sitting.
‘At least I’m dealing with it better than Ed is!’ she thought.
Ollie couldn’t think of a worse way to start a Monday than Sex Education. Ok, so that’s not what it said on the timetable, but that’s what it was. Sex. Ed.
‘Hang on,’ he thought. ‘Sex. Ed…Sexual Edward. Amazing!’
“Alright there, Sex Ed?” he asked casually, while adding rings and studs to the inky ears on the banana.
“Yeah…couldn’t be better,” replied Ed, keeping his eyes locked on the worksheet.
“Ok, Sex Ed, just checking you’re alright, Sexy Ed.”
“Ollie!” hissed Ed, now hearing what he had said.
“What’s up, Sex Ed?” Ollie added, turning to him.
“Ollie, don’t!” whispered Ed.
“I’m sorry,” replied Ollie, “but you need to realize that you can, at times, be a highly sexual person!”
Ed sighed as Ollie picked up his pen to draw sideburns around the ears on the banana.
“We might have to get some T-shirts printed up. I’M WITH SEX ED, and then an arrow,” Ollie added, pointing to his chest to show the position of the words. “Then maybe a fragrance line…an energy drink?…and if it goes really well, maybe a talk show!”
Ollie looked at the banana and thought about what name to give to his new fruit based friend.
“Peely Pete?” he muttered, adding stubble to the face. “Or maybe…Baron Friedrich von Four-Skin?”
“Edward and Oliver!” barked the teacher. “Would you care to explain to the class why you have defaced school property by drawing on your banana?”
There was silence as the class waited excitedly to see how much trouble the boys were in.
“Well?” asked the teacher.
“It wasn’t me…I…” spluttered Ed.
“I know, Edward,” said the teacher. “Oliver’s hands are covered with ink…and he’s holding the pen…and the banana.”
Ollie put down the banana, re-capped the pen and hid his hands under the desk. Gita wished that she could help him somehow, while Becca made faces at the boys behind the teacher’s back.
“Any thoughts, Oliver?” asked the teacher.
“I don’t know,” he replied. “I just thought that as I would usually pretend a banana was a…a…”
“A penis?” suggested the teacher, and the class giggled. “Quiet everyone! Let Oliver finish, please.”
“Well…yeah, I’d usually pretend a banana is…one of those, but now we are pretending it’s one of those, I thought I should pretend that it’s something else?”
Ollie’s words shocked everyone. For once, he had sort of, almost, made sense.
“Please do NOT draw on your bananas,” said the teacher. “We need to re-use them for another class.”
“Ew!” yelled Becca. “Second hand banana penis!”
“Thank you, Rebecca!” said the teacher, as the class burst into laughter. “We’ll have no more of that.”
‘26 minutes and 44 seconds,’ thought the teacher, looking at the clock, ‘and then it’ll be over for another week.’
“In your pairs, I want you to try putting the condom on the banana,” said the teacher. “Don’t be afraid to ask questions and talk to each other about it.”

The class fell silent and a few experienced hands ignored instructions to apply protection with practiced skill.
“Having some trouble, Oliver?” asked the teacher.
No matter how hard he tried, Ollie just couldn’t roll the condom down over the banana.
“Just taking my time. That’s important when you’re with a piece of fruit you really like.”
“Yes, we talked about that, didn’t we,” said the teacher, “but you’ve also put the condom on…inside out?”
“Oh…really?” said Ollie, losing his cool.
The teacher pointed to the worksheet where there was a diagram of a condom and the words:

Condoms are made to be easily rolled down.

Make sure you don’t put them on inside out!

“Edward, could you show Oliver how it’s done, please?” asked the teaching, re-rolling the condom.
“Er…ok…” said Ed, as the teacher moved on.
“Thanks, Sexy Ed,” whispered Ollie.
“Shut up, Ollie!”
When Ed had put the condom on, he decided to treat it as if he was making one of his model airplanes. He just followed the instructions and kept going.

“You going to show me how it’s done then?” asked Gita, looking at the condom in front of them.
“Erm…nah,” replied Becca. “I think you need the practice; you can go first.”
“Ok,” said Gita, taking a deep breath.
She carefully ripped the packet open down one side and pulled the condom out. Its circular, rolled edge reminded Gita of when she was little and would sit in school assembly, rolling her socks down her legs so they made perfect rings of fabric around each ankle.
“Come on, Bex,” she said, giving her the banana to hold, “it’s not a one person job.”
“Alright, if I have to,” replied Becca.
‘Just watch how Gita does it and copy her,’ she thought.
Gita pinched the bulbed end of the condom, put it on the tip of the banana and slowly rolled it down. She thought it would be…well, she didn’t really know, but she didn’t think it would be as easy as it was.
“Once the first person has had a go,” said the teacher, “roll the condom back up so the second person can try it.”
“Swap,” said Gita, as she took the condom off.
‘It doesn’t look too hard,’ thought Becca. ‘If Gita can do it then I should be able to.’ Becca started to roll the condom down, but pulled too much on one side. It slipped out of her grip and onto the desk.
“The ones I usually get are more flexible!”
“Oh, right,” replied Gita. Why couldn’t Becca just admit that she didn’t know any more than her?
“Ok, here we go,” said Becca, putting the condom in place again and carefully rolling it down.
“Finished,” she said, and Gita put the condom covered banana at the front of their desk.
‘Wow,’ thought Becca, ‘that was close!’

“That was boring,” whined Becca.
“I don’t know,” replied Gita, “I thought it was ok.”
“Yeah, I didn’t mind it,” agreed Ed.
“Well, I already know about all that,” said Becca, “and to go through it again was dull.”
As Becca bent down to get her bag, Gita and Ed shared a look. There was an unspoken agreement between her friends that nothing Becca talked about could ever really be believed.
Gita looked over at Ollie, who was with the teacher. She hoped someone would mention the class at lunch, so she could hear what he thought about it.

“How did you find the class?” asked the teacher.
“Yeah, really easy,” Ollie replied.
“But you had some trouble with the activities?”
“You sort out things like this when it comes to it, know what I mean?” said Ollie.
He had realised that as long as you didn’t lay it on too thick, most teachers didn’t mind a bit of banter.
“I know you might not want to hear it, but there are some things you need to pay attention to, and this…” said the teacher, shaking the over sized box of condoms, “…is one of them.”
“Yeah, I guess,” he replied.
“Oliver, when you have sex for the first time, will Edward be there to help you put the condom on?”
“Er…maybe?” Ollie said, as he thought about the question. “I mean, no! No, he definitely won’t.”
“I thought not,” said the teacher, smiling. “When you have sex, don’t you want to know you’re being safe? So you can enjoy it?”
“Suppose so,” said Ollie, bashfully.
The bell rang and the teacher smiled at him.
“You need to go to your next lesson, but if there’s anything you want to talk about, you know we’re here to listen and help.”
Ollie put his banana with the others in the box.
“Oh, I think you’d better keep your banana.”
“Really?…Thanks,” said Ollie, and his mind shifted to his banana buddy. “Come on, Tony Sun Skin! I’m gonna make you a hat out of a paper cup!”
‘Coffee,’ thought the teacher. ‘I definitely need coffee.’

Click here to buy The Unicyle Diaries in paperback and eBook

Praise for The Unicycle Diaries

“I’m really proud of my son, his book is fantastic.“

“Thanks for you email Mr. Reed, unfortunately we don’t feature content sent to us by  persons seeking to promote their work. Please do contact our sales department if you wish to buy some advertising space.“

“Its like…a book for kids?“

“You should have seen Mike’s cover illustrations before he asked me to do them. Seriously, it looked a toddler had gone wild on photoshop!“

“Mr. Reed, there’s no point sending another email pretending to be someone else, especially not when you use the same email address.”

“Mate, I promise I’ll read it after I’ve finish this season of Game of Thrones.“

“The Guardian warned us about you.“